My flight arrived at the San Francisco airport on schedule, descending over breathtaking views of the Bay. My first thought upon landing in San Francisco were of sheer delight. The plane was small, and the person in front of me had their seat back for the entire flight, crunching my legs into space only a 2 door Honda sedan would dare to call sufficient.

Once I disembarked, I felt a bit overwhelmed. Everything I expected of Ontario airport I got from San Francisco. So many people, such a big place. Finding my flight information was easy; there were monitors all over the place. My flight was delayed. I expected that, having heard about the Huston flight back in Ontario. The reason cited was “awaiting aircraft”. I figured this meant that it would get there when it got there. I tried to find my gate right away. I didn’t want to be lost when my plane finally did arrive. I got turned around twice, but eventually found my way.

I passed dozens of shops. See’s candy. Tortilla shops. Cellular shops. Neck Pillows for $34.99. Thank god I brought mine from home.  Once I got to my gate, I felt the familiar High-school uncertainty of finding a place to sit. It was very artsy, with odd shaped chairs and round ottomans mixed in with traditional airport rows. There wasn’t many places empty, and dozens of people were walking around looking for places together. My flight had not been the only one delayed.  I found a seat near a power outlet, where I could plug in my laptop and fiddle with Photoshop while I wait.

I will give San Francisco airport this; it may be very confusing, but it has plenty of places to plug in mobile devices.

It amazes me how so many people can be in one place, all making noise and yet no one talking to anyone. The whole row where I sat people didn’t even make eye contact. I made use of the extra hour, and avoided the other people back by doodling the picture below. 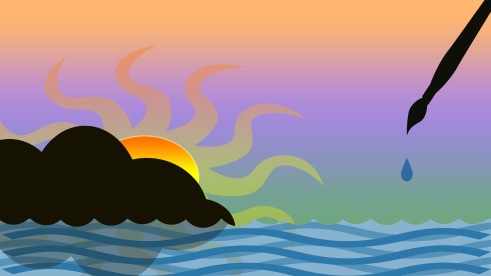 It was inspired by the guy sitting behind me talking loudly on his cell phone about being excited to go back to Hawaii from a semester stay in London. He was stuck in San Francisco waiting for his connecting flight. He kept talking about how warm it was in the airport. I thought about how relative warmth or cold is to people based on where they are from. Here I was wearing a sweater and chastising myself for choosing to wear sandals. I was cold the entire flight over, and I had all my closed toe shoes in my checked bag. I think he noticed I was listening in, becuase he moved a few rows over and started talking more quietly. Oops. If I ever thought I might run into him again I might have been embarassed, but there is zero chance of that, and if he meant for his conversation to be private he might not want to be shouting into a phone in a room full of people. Just saying.

When they finally announced our flight would be boarding, a collective sigh went up, along with a few cheers.

This flight was completely full, and it was one of the larger planes. I waited 20 minuites for my group to be allowed to board. I crammed into the window seat with a magical view of the engine. This flight would be nearly 4 hours, crossing 2 time zones. It took forever to taxi onto the runway, but when we finally, finally took off the excitement of being on our way  again took over, keeping me from sleep.

I was over being crammed next to two silent strangers, sitting next to a noisy engine, and having ice cold air blasted at my feet before it even began to get dark outside my plane window. At that point, we still had two hours of travel ahead. I hadn’t bought a snack on the airplane because it was way overpriced, and I was afraid sliding my debit card would lock it up for my husband back home (we have been having an issue with our bank thinking everything we do is unauthorized, even though I have told them my husband’s job cover’s three counties. They lock our card and we have to call to unlock it before we can access our funds. Can’t do that from a plane.) So I was really hungry, really cold, and really tired. Travel is not nearly as glamorous as I thought it would be.

We landed at O’Hair Airport after midnight Chicago time, just under two hours late.  I walked what felt like a mile to the baggage claim, trying to coordinate a meet up with my friend on my cell phone.  I saw him before he saw me, and I couldn’t help but feeling overjoyed. The discomfort and hassle of travel suddenly didn’t matter. I told him to turn around, at which point he squished me in a bear hug. After all that disappointment, there it was. The Hollywood perfection of seeing someone you love after a long time apart.

My Chicago friend and I, We will call him Robbie, have been friends since we were 11. Both of us have flame red hair and pasty white skin. For most of our school years, people assumed we were brother and sister. We don’t actually look anything alike, save our complexion, but redheads are rare in my corner of the universe, so people make assumptions. Over the years we have been roommates several times, coworkers, classmates, and the dearest of friends. Even When Robbie was in the navy we stayed in touch through letters, all of which I still have. I don’t know why we have always been so connected, we just are. Robbie had a really ugly break up, and he wanted a fresh start, so he moved to Chicago, his favorite station when he was in the Navy. Once he was settled, he invited me to visit.

So here I was, being crushed by my dearest Robbie, finally seeing the Chicago he had been raving about since we were teenagers. I squashed him right back. A few moments of no air, and a bunch of people shoving past us made us realize we were blocking the path to the baggage claim.  We laughed and retrieved my giant pink Hawaiian print luggage. Then Robbie asked me if I wanted to take a cab or if I was up for the subway.

“which is cheaper?” I asked. Silly me.

“Subway is always cheaper. But do you think you can handle it? We have to walk a ways.” Robbie warned me.

When Robbie said it was a ways, I though he meant, two maybe three parking lot distances.

No. You descend into the bowels of the airport, and walk a very long ways until you get to the train. Robbie bought me a card that you use to pay for the subway. It makes an entertaining, “Bing-bong” noise when you hold it over the reader. Very new age stuff.

The train, however, was ancient. We were in the very last car, and it sounded like it was going to derail about every 15 seconds. Each little bump in the track lurched us into one another. Across from me sat a rather loud African American homeless man singing the blues off key. He stared at me the entire ride. I ignored him and tried to talk only to Robbie.

When we approached our stop Robbie jumped up and said, “come on this is our stop.”

The train lurched to a stop, and the doors opened only for a moment. I leapt out, feeling as though I’d jumped off a boat. The doors closed behind me and the train took off. Now I understood why he got out of his seat before the train stopped moving; Chicago subway trains only stop for about 20 or 30 seconds.

I thought that we would be on our way to his home from there, but instead we got on a bus. Robbie was my personal tour guide, talking to me about all the neighborhoods we were going through along the way. The sheer size of Chicago was staggering to me. It was hard to be impressed by the architecture just yet, since it was so late at night.

Finally we arrived in Lakeview, one neighborhood of Chicago. We then walked 6 blocks to Robbie’s apartment building. We took the elevator to the 12th floor. He made me a bed on an air mattress, and I sacked out for the night.

In the morning, I woke up to this amazing view out my window.

The view was just the first of many I would see over the next week. 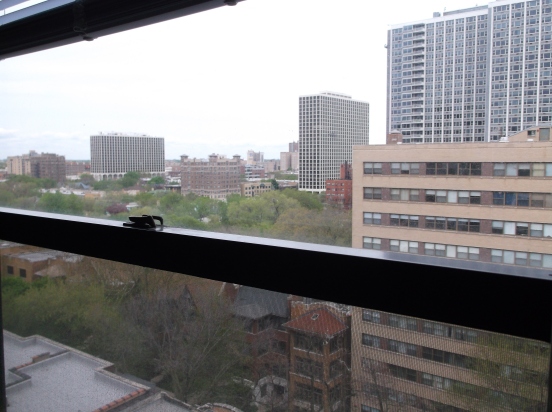 One thought on “Chicago Part 2” 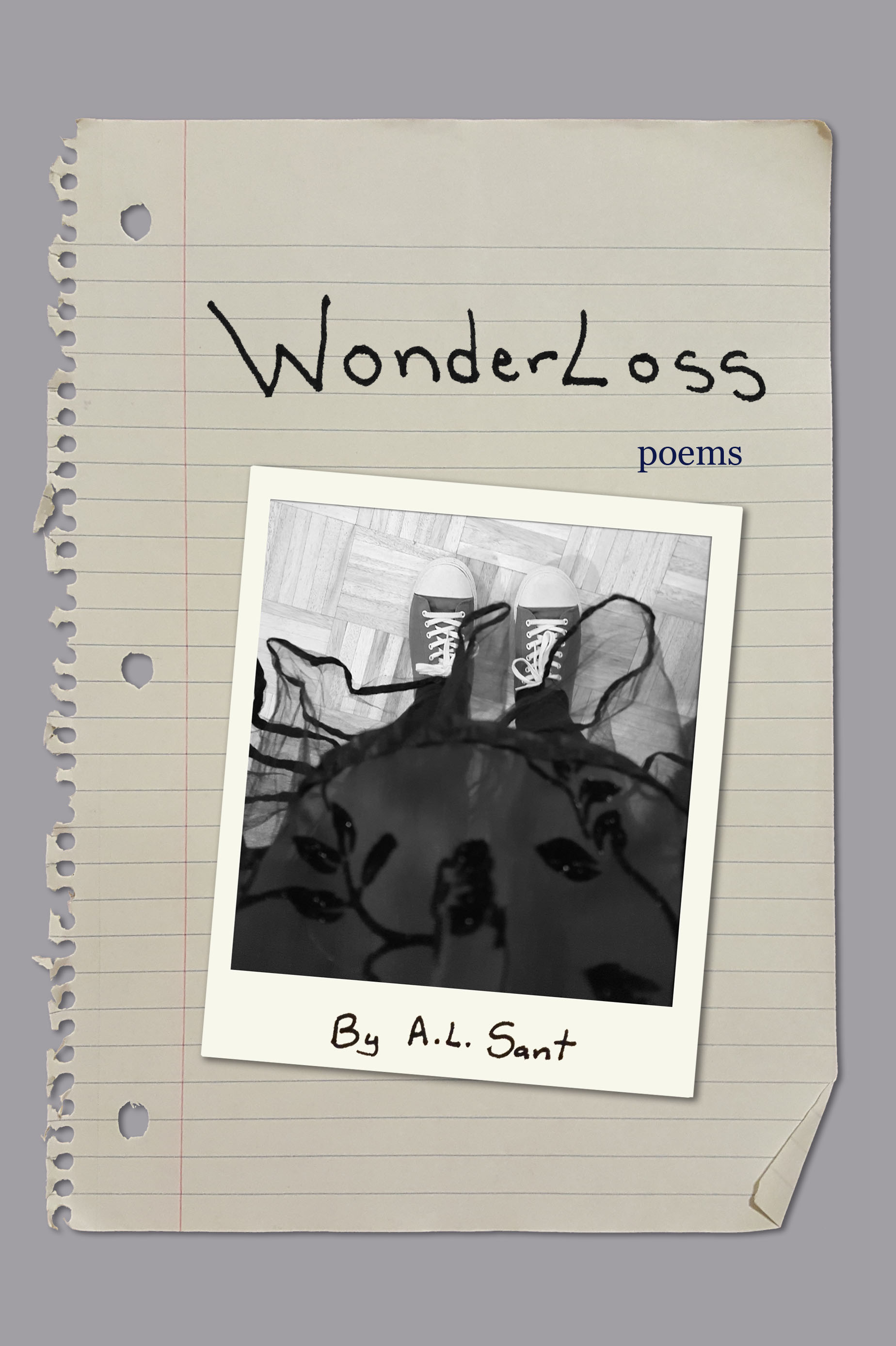